Enter contact details and we will notify you, when the product is available. 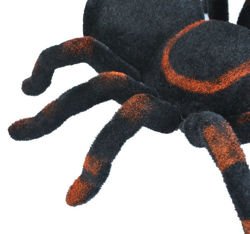 This extremely realistic spider is a remote-controlled toy which will make many hearts race. Remote control tarantula will make people run away in fear before realising that it is just a toy. The spider with remote control is a perfect idea for a prank. The spider moves on rollers which allows it to run very quickly and it is very agile when while rotating. The spider is really huge, it is impossible not to notice it. When it will come out of a dark corner, moving all its legs, even your bravest friends will have their legs tingle and shake.
The spider can be used to scare people, however, it also has an educational function as the toy realistically imitates the way spiders move. This toy can be also used during therapy sessions to overcome arachnophobia.
The remote-controlled tarantula has an extremely realistic look. The whole surface is covered with tiny hair, so it looks just like a real spider. In addition, the spider has a glowing blue eyes. You can control the spider within the range of 4 m. The remote control has an elastic antenna, 4 control buttons (forwards, backwards, 360° turn right and 360° turn left). There is one button in the middle of the controller which turns on demo mode (the tarantula moves in random directions) and one ON/OFF button located next to the antenna.

Race Track 2in1
Product not available in retail sales. Please register to see the wholesale prices.

Tent Igloo With Tunnel And 200 Balls for Kids Children Play #2880
Product not available in retail sales. Please register to see the wholesale prices.

4.36 / 5.00 1791 reviews
IdoSell Trusted Reviews
2020-05-07
Thank You, All is ok
2020-05-08
alles gut danke
View all reviews (1791)
This page uses cookie files to provide its services in accordance to Cookies Usage Policy. You can determine conditions of storing or access to cookie files in your web browser.
Close